Scicli is a monumental baroque city in the shape of a magnificent living crib.

With the municipalities of Caltagirone, Militello Val di Catania, Catania, Modica, Noto, Palazzolo Acreide and Ragusa, it was added in 2002 in the list of UNESCO World Heritage (WHL) due to the Sicilian Baroque.

These municipalities are all in this region of eastern Sicily, which geographically is in the southern tip of the island, located between the provinces of Ragusa, Siracusa and part of Catania. 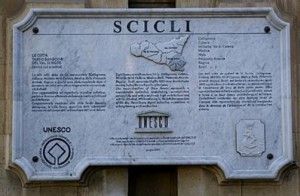 Very well positioned, perfectly downtown situated, with easy parking. The house is elegant but cosy too. Nothing is missing. Well equipped and cool without the need for air conditioning. We are already planning to come back again soon. Larry (May 2015)

Elio Vittorini wrote in his unfinished novel “Cities of the World”: “The city of Scicli is located at the intersection of three valleys, with houses on all sides of the cliffs, a large square in against-low astride a large stream, and former ecclesiastical buildings that crown in several places, like the baroque acropolis, a semicircle […]

Located on the ground floor, Casa Pietro is a beautiful independent bedroom with a double bed and a bathroom. It is equipped with air conditioning, satellite TV, Internet with Wi-Fi as well as a refrigerator and an electric kettle.

Located on the first floor, Casa Emma is an apartment composed of a double bedroom, a living room with a dining table and a double sofa bed, a kitchen and a bathroom. The kitchen is fully equipped and includes a ceramic hob, a microwave oven, a refrigerator and a washing machine. Casa Emma is equipped […]

Located on the first floor, Casa Francesca is an apartment composed of a double bedroom, a bedroom with two single beds, a spacious lounge, a kitchen and a bathroom. The kitchen is fully equipped and includes a dining table, a ceramic hob, a microwave oven, a refrigerator and a washing machine. Casa Francesca is equipped […]